Integration test and automation library for Telegram Messenger bots based on Pyrogram.

An integration test and automation library for Telegram Bots based on Pyrogram.
Test your bot in realtime scenarios!

Are you a user of TgIntegration? I'm actively looking for feedback and ways to improve the library, come and let me know in the official group!

A basic understanding of async/await and asynchronous context managers is assumed, as TgIntegration heavily relies on the latter to automate conversations.

You can follow along by running the example (README)

Suppose we want to write integration tests for @BotListBot by sending it a couple of messages and checking that it responds the way it should.

After configuring a Pyrogram user client, let's start by creating a BotController:

Now, let's send /start to the bot and wait until exactly three messages have been received by using the asynchronous collect context manager: 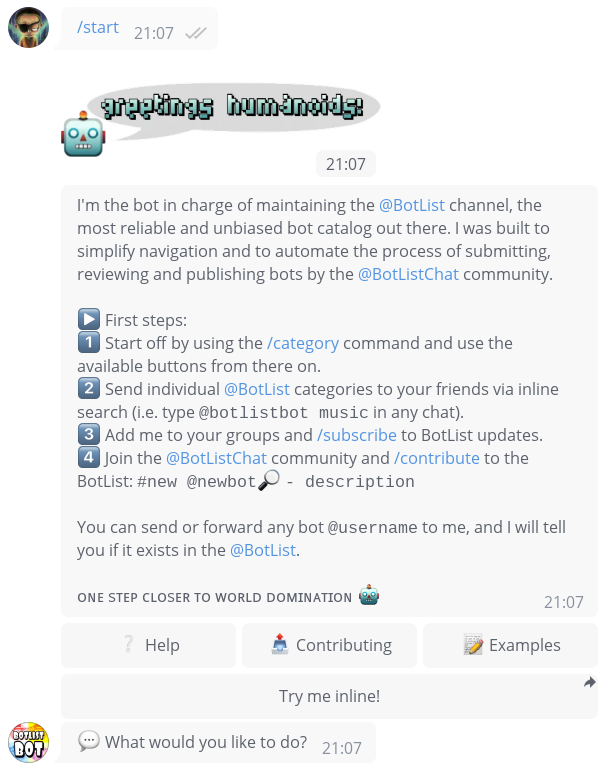 Examining the buttons in the response...

We can also press the inline keyboard buttons, for example based on a regular expression:

As the bot edits the message, .click() automatically listens for "message edited" updates and returns the new state as another Response. 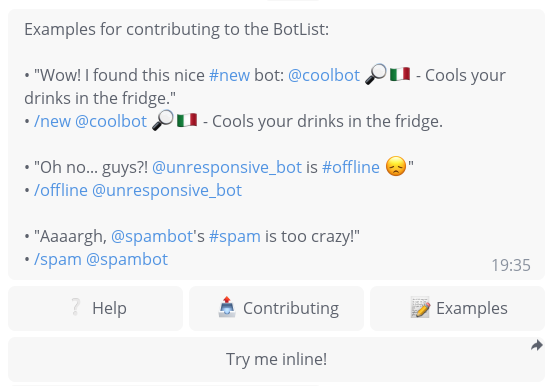 So what happens when we send an invalid query or the peer fails to respond?

The following instruction will raise an InvalidResponseError after controller.max_wait seconds. This is because we passed raise_no_response=True during controller initialization.

Let's explicitly set raise_ to False so that no exception occurs:

In this case, tgintegration will simply emit a warning, but you can still assert that no response has been received by using the is_empty property:

Pytest is the recommended test framework for use with tgintegration. You can browse through several examples and tgintegration also uses pytest for its own test suite.

I haven't tried out the builtin unittest library in combination with tgintegration yet, but theoretically I don't see any problems with it. If you do decide to try it, it would be awesome if you could tell me about your experience and whether anything could be improved 🙂 Let us know at 👉 https://t.me/TgIntegration or in an issue.