CategoriesDiscussions
Choose the right package every time
Openbase helps you choose packages with reviews, metrics & categories. Learn more
CategoriesLeaderboard
Sign up with GitHub
By signing up, you agree to our terms of service and privacy policy
Log In
What's Openbase?•Help•Send Feedback
melee
pypi i melee

Open Python 3 API for making your own Smash Bros: Melee AI that works with Slippi Online

Open API written in Python 3 for making your own Smash Bros: Melee AI that works with Slippi Online

Libmelee is on pip, this will be the easiest way to get the library and stay updated.

And definitely stay updated, as the library will be actively improved.

Do not play on Unranked There is no libmelee option for it, but don't try. Eventually we'll have a way to register an account as a "bot account" that others will have the ability to opt in or out of playing against. But we don't have it yet. Until then, do not play any bots on Unranked. If you do, we'll know about it, ban your account, overcook all of your food, and seed you against a campy Luigi every tournament. Don't do it.

Here's a ~10 minute video that will show you how easy it can be to write a Melee AI from scratch. 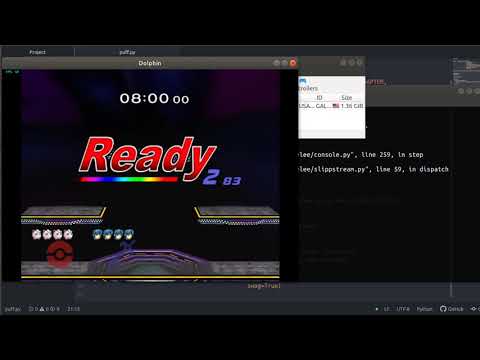 Some of the minor aspects of the API have changed since this video was made, but it's still a good resource.

This readme will give you a very high level overview of the API. For a more detailed view into specific functions and their params, check out the ReadTheDocs page here: https://libmelee.readthedocs.io/

The GameState represents the current state of the game as a snapshot in time. It's your primary way to view what's happening in the game, holding all the information about the game that you probably care about including things like:

Also a list of PlayerState objects that represent the state of the 4 players:

The GameState object should be treated as immutable. Changing it won't have any effect on the game, and you'll receive a new copy each frame anyway.

Note About Consistency and Binary Compatibility

Libmelee tries to create a sensible and intuitive API for Melee. So it may break with some low-level binary structures that the game creates. Some examples:

Some Values are Unintuitive but Unavoidable

Other values in Melee are unintuitive, but are a core aspect of how the game works so we can't abstract it away.

Libmelee lets you programatically press buttons on a virtual controller via Dolphin's named pipes input mechanism. The interface for this is pretty simple, after setting up a controller and connecting it, you can:

Or tilt one of the analog sticks by:

Dolphin will accept whatever your last button input was each frame. So if you press A, and then release A on the same frame, only the last action will matter and A will never be seen as pressed to the game.

Also, if you don't press a button, Dolphin will just use whatever you pressed last frame. So for example, if on frame 1 you press A, and on frame 2 you press Y, both A and Y will be pressed. The controller does not release buttons for you between frames. Though there is a helper function:

which will release all buttons and set all sticks / shoulders to neutral.

Each of these old values will be removed in version 1.0.0. So update your programs!

libmelee is inspired by, but not exactly conforming to, the OpenAI Gym API.