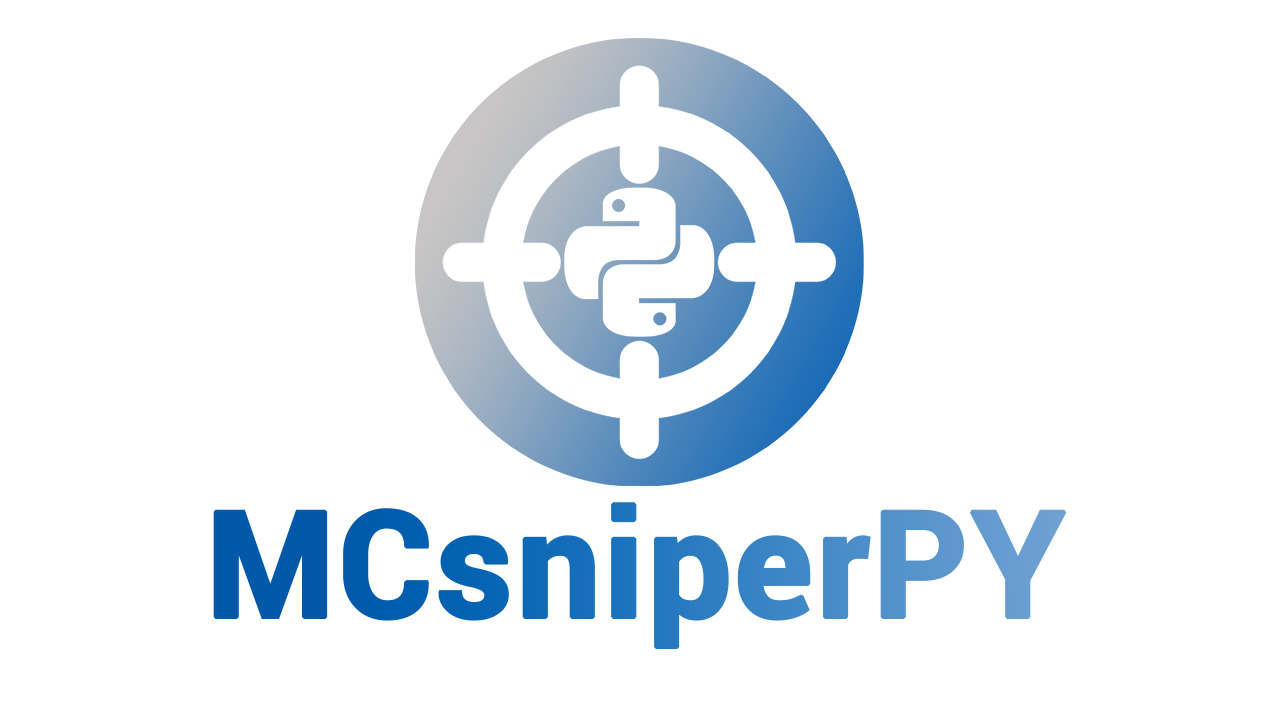 MCsniperPY is looking for people to help code it! If you want to contribute something (not just code) refer to CONTRIBUTING.md.

If you would like to support the development of MCsniperPY, and my (Kqzz) other projects, you can use one of these affiliate codes below or donate through Brave tips, GitHub sponsors, or another cryptocurrency.

If you're interested in running MCsniperPY on a server (FOR FREE) that will have much better / more consistent connectivity check out these two places:

By signing up with that link you are supporting me and getting free vps to host the sniper on!

Once you have opened the installer, make sure that you add Python to path. Your installer should look like this: 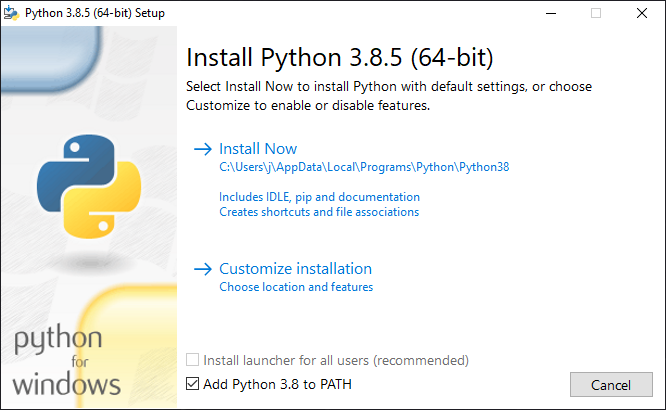 Since there are so many package installers for Linux, we are going to use apt used in Debian-derived distros such as Ubuntu as an example.

Go to the terminal and type in the following:

You now need to open a command prompt. Navigate to the folder you want to install MCsniperPY on and open the folder and typing cmd in the path: 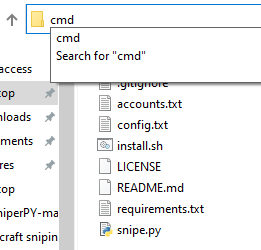 Once you have a commant prompt open to the correct path, type the following commands:

Many windows users will have to run py -m mcsniperpy instead of the mcsniperpy command in the future sections of this readme. you'll want to always do this or it won't work.

If you get a message similar to this:

'py' is not recognized as an internal or external command, operable program or batch file.

then you will need to reinstall Python following the guide above, make sure that you added Python to PATH.

If you get a red error, with this message inside:

then you will need to download Microsoft Build Tools, you can do that by downloading the following program and installing Build Tools:

Otherwise, you have installed the correct dependencies and can follow on with the tutorial. If you have a problem and can't figure it out, feel free to ask in #support in the McSniperPY Discord server.

If you get a message saying something like WARNING: The script mcsniperpy is installed in '/home/$USER/.local/bin' which is not on PATH. then run the command below. If that fails, try replacing bashrc with zshrc.

Sometimes your computer's time can come out of sync. If this happens to you then all of your name snipes will be inconsistent, meaning you can't figure out your delays properly and all of your snipes are just lucky. Dimension 4 fixes this. The UNIX equivalent to this is called chrony.

Install Dimension 4, then open it. 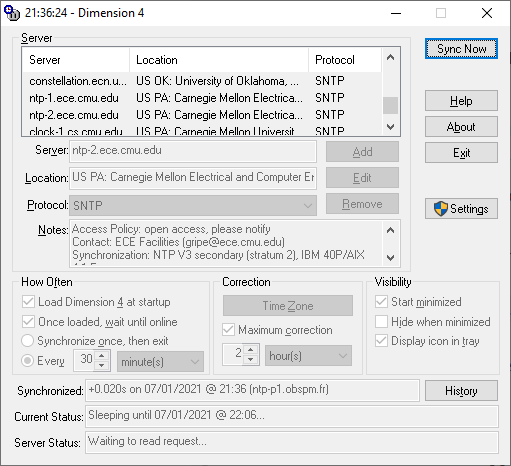 Click the "Sync Now" button at the top right, your time should now be synced.

You can check if your time is synced by visiting the following website:

Note: You do not need to read this paragraph to use the sniper. It may be helpful to you in the future though.

Something that MCsniperPY does differently than other snipers is it's method for loading accounts and your configuration. Rather than requiring you to be in a certain directory with your config and accounts file, MCsniperPY requires you to initialize it in a directory which will act as your "home" directory (not to be confused with your system's home directory). When you run mcsniperpy init, MCsniperPY does a lot of stuff under the hood. It starts by making (or not, if it already exists) a directory in $HOME or %userprofile% called .mcsniperpy and putting a "backend" configuration file, which contains a path to your current working directory (which is now your "home" directory for MCsniperPY) in that directory. This is where MCsniperPY looks to figure out where your accounts and config are. If you move or delete this directory or config file your sniper will not function until you run mcsniperpy init again. After that, it makes your config and accounts file in your current directory. Whenever you run the mcsniperpy snipe command from now on it will check that config file to find your accounts and main config file.

Initializing your sniper is very simple. It's the same no matter what platform you're on. All you do is run the command shown below in a terminal / command prompt. It should do everything mentioned in "How Initialization Works" in the MCsniperPY documentation. to sum up that section, it makes a config and accounts file for you and then stores the path to both of those files so you don't have to worry about what directory you're in again!

Note: accounts.txt is located in the directory you initialized MCsniperPY in.

Awesome! Now that you've put your account(s) in the accounts.txt file it's time to configure the sniper to your liking. Just look for a file named config.ini in the same folder / directory as your accounts.txt, and open it with a text editor (notepad, or something else). You can edit the values to your liking.

Note that currently only Mojang accounts are supported.

timing_system: kqzz_api / namemc / teun / ckm (namemc does not work at times because cloudflare blocks the scraper, ckm is the default value and newest API)

snipe_requests: the amount of requests for every account in your accounts.txt File. (For Example: 10 Accounts = 30 Requests)

max_accounts: The maximum number of accounts allowed in your accounts.txt file before MCsniperPY warns you (1 is recommended)

change_skin_on_snipe: yes or no to automatically change the skin on snipe

skin: depends on what you put at skin_change_type

webhook_urls: webhook urls, separated by commas (if you have one url, then no need for any comma)

Offsets are useful for 2 reasons — ping and server lag.

If you have high ping to Mojang's APIs (api.minecraftservices.com, not api.mojang.com - they're seperate servers) then using a higher ping is recommended, vice versa goes for lower pings. Note that MinecraftServices is hosted in Ashburn, Virginia.

If a lot of people are going for a username (you can usually determine this by the amount of views it has on NameMC) then Mojang's servers can lag. It's generally advised to use a higher delay when going for a name with high views.

Other people's delays in most cases won't work on your machine. Delays can depend on many things, including ping, network routes and even CPU speed.

How do I find an offset that works for me?

While finding an offset is now fairly easy, it still requires some manual tweaking. Start by running mcsniperpy offset-test --aim-for .1 in your terminal. After a little bit it should say [success] <offset> is a good offset! Start with that offset and tweak based on if you're early or late. Compare the droptime of the name to the time of the requests. if you are late, then that means your offset is too low. if you are early, that means your offset is too high. Keep tweaking until you find something that works for you!

When you attempt to snipe a name, you are given information about the requests that McSniperPY sends to Mojang's API. This information is in the following format:

When the sniper sends requests to a server, it returns a HTTP Status Code. Mojang's API returns a status code based on what we requested, in terms of name sniping, the status codes and their meanings can be seen below:

Now that you've got everything setup, it's time to try a snipe! You can start the sniper with one simple command! Just run the command shown below, enter in the necessary values (i'll cover offset later; it's the same as delay btw), press enter, and wait for the name to drop! Hopefully you get the name 🤞

For this section, replace YOYRPYTHONPREFIX with py for Windows and python3 for MacOS or Linux.

Thanks to sneakers and tropicbliss for writing these docs!