Reduce T5 model size by 3X and increase the inference speed up to 5X.

T5 models can be used for several NLP tasks such as summarization, QA, QG, translation, text generation, and more. Sequential text generation is naturally slow, and for larger T5 models it gets even slower. fastT5 makes the T5 models inference faster by running it on onnxruntime. and it also decreases the model size by quantizing it.

fastT5 library allows you to convert a pretrained T5 model to onnx, quantizes it, and gives the model as output which is running on an onnxruntime in a single line of code. You can also customize this whole process.

You can install fastT5 from PyPI:

If you want to build from source:

The export_and_get_onnx_model() method exports the given pretrained T5 model to onnx, quantizes it and runs it on the onnxruntime with default settings. The returned model from this method supports the generate() method of huggingface.

If you don't wish to quantize the model then use quantized=False in the method.

to run the already exported model use get_onnx_model()

you can customize the whole pipeline as shown in the below code example:

T5 is a seq2seq model (Encoder-Decoder), as it uses decoder repeatedly for inference, we can't directly export the whole model to onnx. We need to export the encoder and decoder separately.

past_key_values contain pre-computed hidden-states (key and values in the self-attention blocks and cross-attention blocks) that can be used to speed up sequential decoding.

Next, we'll export all three models (encoder, decoder, init_decoder). And then quantize them, quantizing 32bit to 8bit should give the 4x memory reduction. Since there is an extra decoder the model size reduces by 3x.

The inference is simple as the model supports the generate() method of huggingface.

The benchmarks are the result of the T5-base model tested on English to French translation.

The following graph shows the latency of the quantized onnx model vs the PyTorch model for beam numbers varying from 1 to 9. The latencies shown here are for the mean of sequence lengths up to 130. 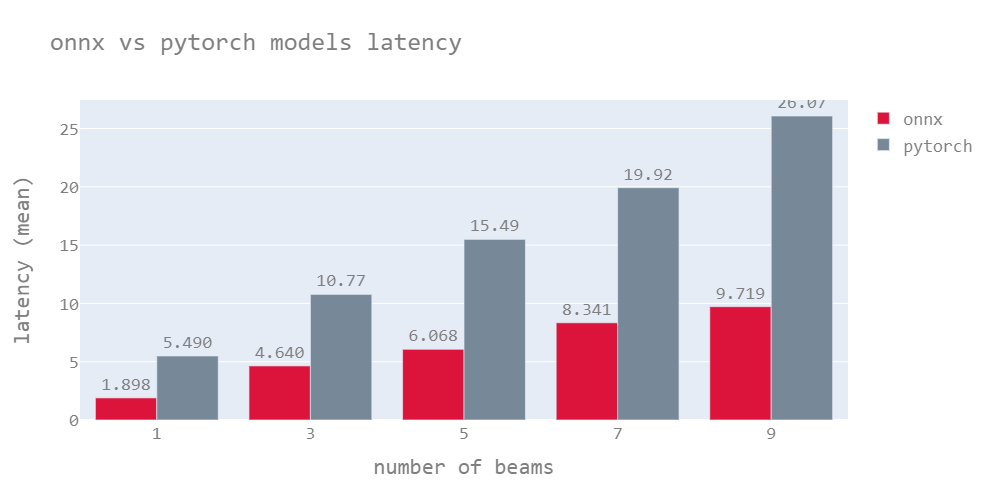 The following heat map shows the X times faster which the ratio of latency of PyTorch to onnx model. The onnx model outperforms most cases. however, the speed of the model drops for a longer sequence length. 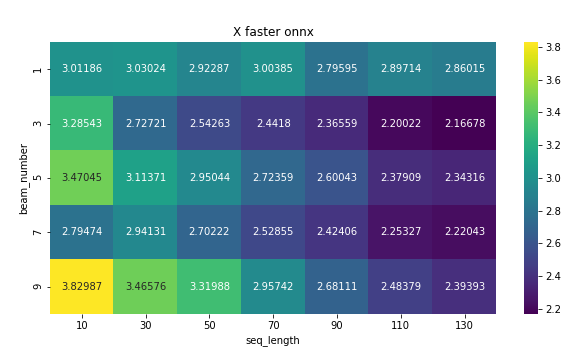 Quantized models are lightweight models as mentioned earlier, these models have almost the same accuracy as the original model (quantized model scores are mentioned in the next section). Quantized onnx models have the lowest latency compared to both Onnx & PyTorch models. 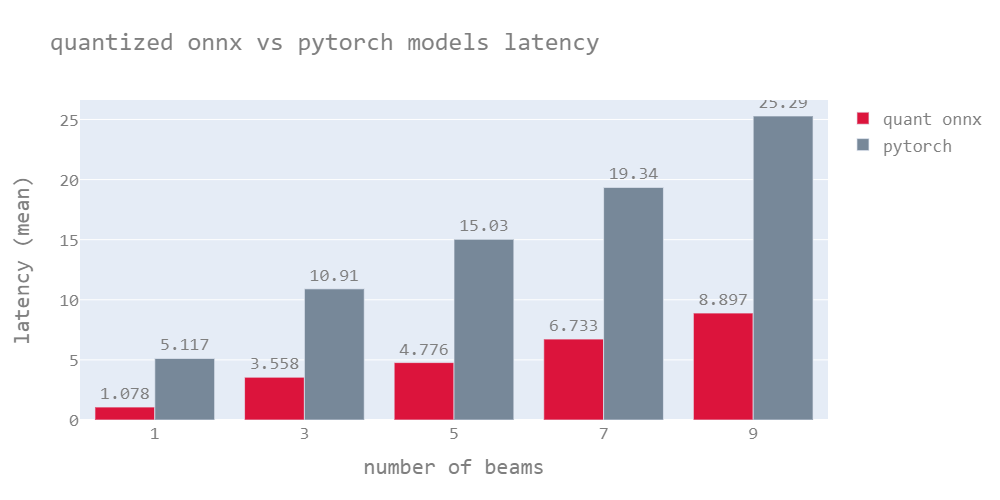 The model outperforms the PyTorch model by 5.7X for greedy search on average and 3-4X for beam search. 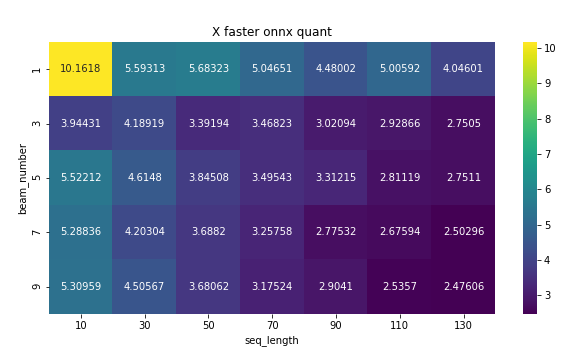 Note : The results were generated on AMD EPYC 7B12, these results may vary from device to device. The Onnx models usually perform well on high-end CPUs with more cores.

The results were tested for English to French translation with beam search number of 3.

The HuggingFace model hub supports private models. To use a private, pre-trained version of T5 with fastT5 you first must have authenticated into HuggingFace ecosystem with $ transformers-cli login. Then, when using fastT5, there is an extra import and call:

If you are unable to call $ transformers-cli login or prefer to use your API Key, found at https://huggingface.co/settings/token (or https://huggingface.co/organizations/ORG_NAME/settings/token for organizations), you can pass that as a string to set_auth_token. Avoid hard-coding your API key into code by setting the environment variable HF_API_KEY=<redacted>, and then in code: