Clearly see and debug your celery cluster in real time!

Clearly see and debug your celery cluster in real time!

Do you use celery, and monitor your tasks with flower? You'll probably like Clearly! 👍

Clearly is a real time monitor for your celery tasks and workers!

While I do like flower, to me it's not been totally up to the task (pun intended :).
Why is that? flower needs page refreshes, filters only one task type at a time, displays results as plain strings without any formatting or syntax highlighting, and on top of that also truncates them!

And clearly is actually real time, has multiple simultaneous filters, a beautiful syntax highlighting system, an advanced formating system that shows parameters, results and tracebacks just as an ipython would, has complete un-truncated results and is very easy to use! 😃
Also you can install it very easily with a docker image!

It's great to actually see in a totally real time way what's going on in your celery workers! So it's very nice for inspecting, debugging, and even demonstrating your company async-superpowers (put clearly on a big screen TV showing all tasks of your production environment 😜)!

Clearly is composed of a server, which collects real time events from the celery cluster, generates missing states, and streams filtered data to connected clients; and a client, which you use to send filter commands and display both real time and stored data. They communicate with each other via gRPC and ProtocolBuffers. 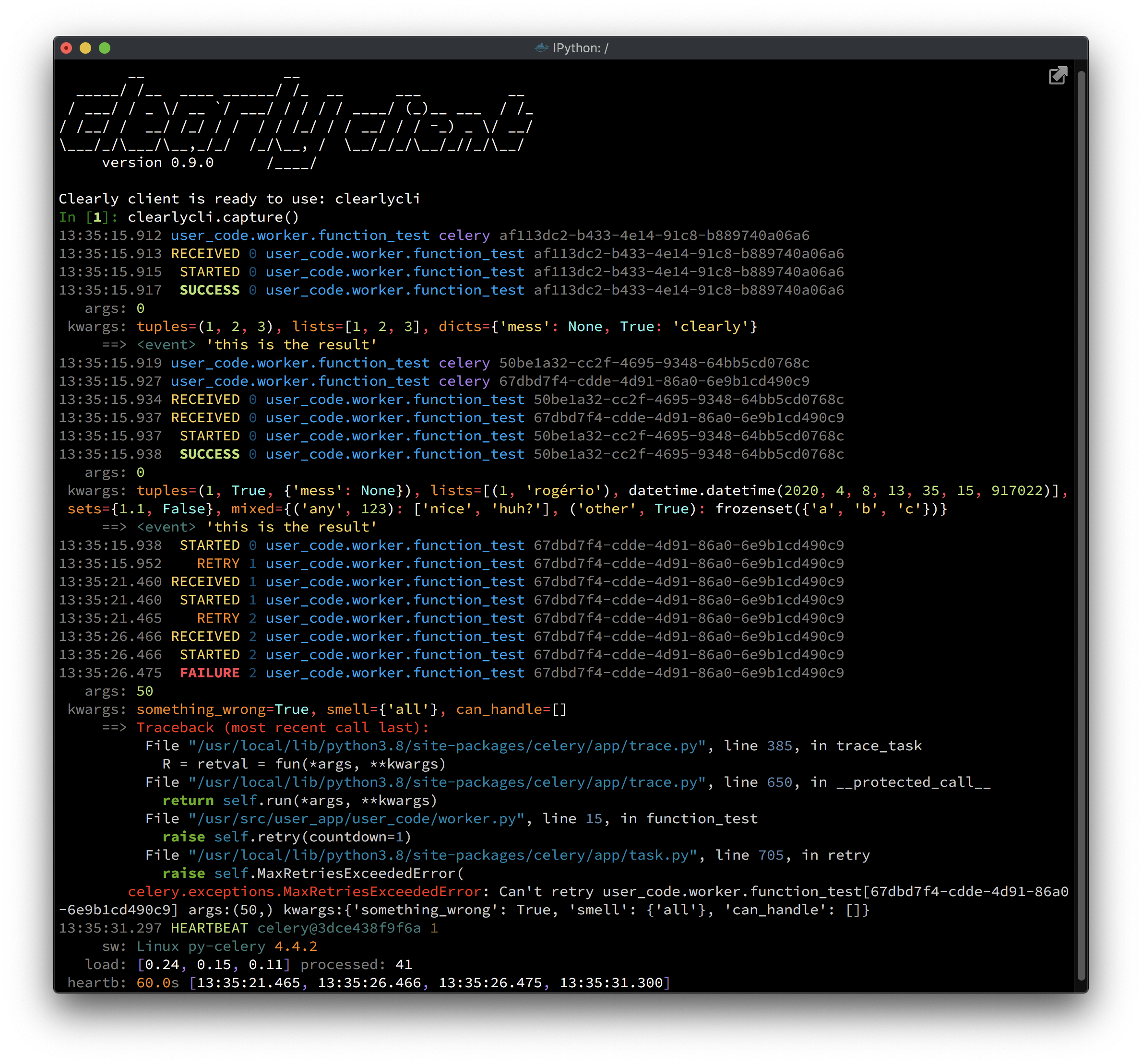 Clearly has received a major revamp in version 0.9, since its very near 1.0! \o/

All code has been revisited and several new features were implemented, which took ~170 commits, ~70 files changed and ~2700 additions! Clearly is now more mature, more reliable and way more polished in general, with beautiful colors and complete error handling, making this new Clearly way more pleasant to use!

And there's also the unit tests, which were greatly streamlined. The suite has gone from ~2600 tests down to less than 700, while keeping 100% code coverage (branch-coverage)! The PR is in https://github.com/rsalmei/clearly/pull/52 if you'd like to see it.

This endeavor has taken five weeks of full-time work, and demanded a great effort. If you appreciate my work, you could buy me a coffee 😊, I would really appreciate that! (the button is on the top-right corner)

Also please help Clearly gain more momentum! Tweet about it, write a blog post about it or just recommend it!

Clearly enables you to:

Get clearly the docker way

To use clearly, you just have to:

and you're good to go!

Note: The above volume (-v) is not really necessary, but it's very nice to not lose your clearlycli history every time you leave it. I recommend it 👍.

How to use it

So, you are ready to see tasks popping up in your screen faster than you can see? (Remember to filter them!)

Example using the capture() method, which will show all real time activity in the celery cluster, including both tasks and workers. 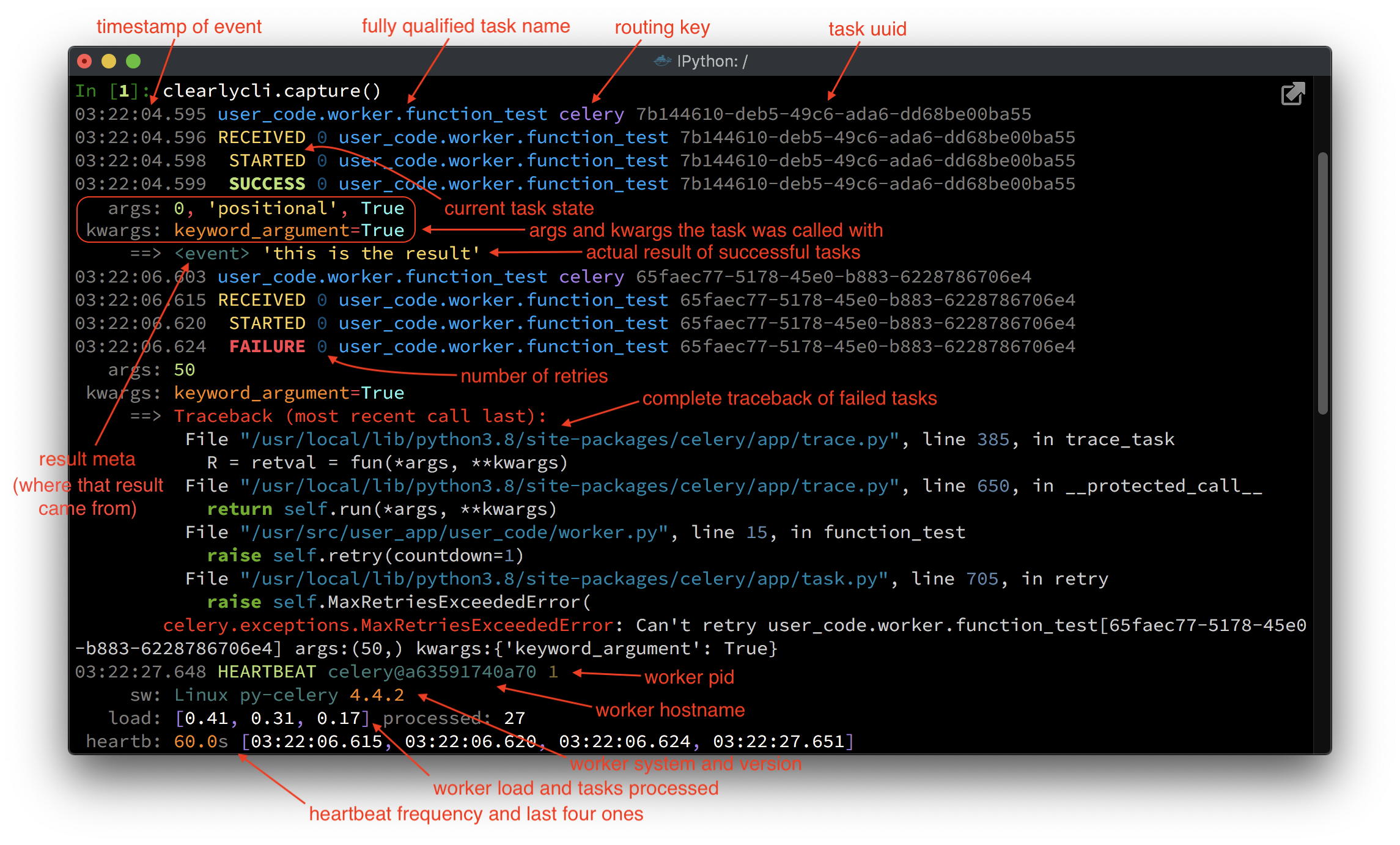 The real time method variants block to receive streaming events from the server.
At any moment, you can CTRL+C out them, and rest assured the server will continue to gather all events seamlessly, it's just this client that will stop receiving them. The capture_tasks() and capture_workers() methods receive only its respective real time events.
The tasks() and workers() methods operates similarly, but retrieving only stored events without blocking.

The client will display those events in a format configured by the corresponding Display Mode.

Display modes specify the level of details you want to see. Things like to show or not arguments being sent, to show exceptions, with or without arguments, to show tasks' results, etc. 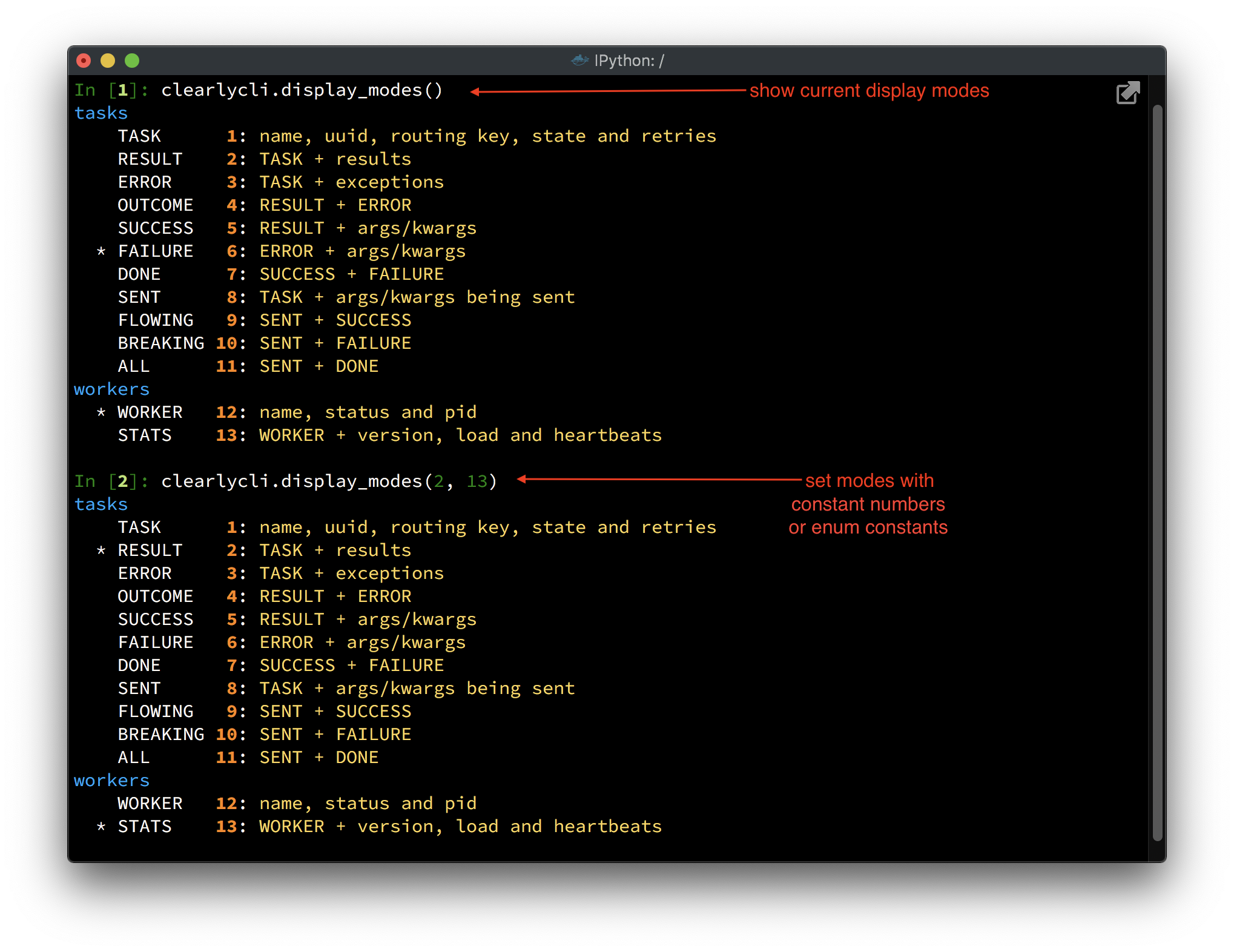 To change a display mode, just call the same method with the constant number beside it or the enum constant.

You can also change only one display mode at a time (just call with one argument).

And even configure the default directly in the docker run env: just include a -e CLI_DISPLAY_MODES="...", with one or two constant numbers (the enum constants are not accepted here).

This section should be pretty self-explanatory.

Clearly has started as a fully contained tool, one that you just run in a python REPL and filter tasks! It used to connect directly to the broker, which had several shortcomings like stressing the broker a lot (repeating all events to all connected clearlys), and losing all history whenever it was closed.

Nowadays, its software architecture is quite different. Since version 0.5, it is split in two software components: a server that extracts events and share data, and a client that interfaces with it, sending commands and displaying results.

Clearly server has three subsystems: the listener, the dispatcher and the RPC server. The listener runs on a background thread, that captures raw celery events in real time directly from the broker, updates their tasks in an LRU cache and dynamically generates missing states if needed (so it seems the events were perfectly ordered to the user). The dispatcher runs two other threads that handle connected users, filtering and dispatching selected events to the interested parties. The RPC server implements the gRPC communication mechanism.

The events in the server may (and usually will) come in a chaotic order, so it must dynamically generate missing states and ignore late ones, so you never see a STARTED task before it being even RECEIVED, which would be weird. In a real time monitoring system this is very important, as it's not only about displaying the current state, but displaying the complete train of events that lead up to that state.

Clearly client can filter real time and persisted tasks by name, uuid, routing key and state, and workers by hostname, including brief metrics about the clearly server itself. It has advanced formatting and syntax highlighting abilities, and configurable display modes to exhibit selected data. It does not use any threads and is totally broker and celery agnostic, relying only on the server via gRPC.

The arguments of the tasks are safely compiled into an AST (Abstract Syntax Tree), and beautifully syntax highlighted. Successful tasks get their results directly from the result backend if available, to overcome the problem of truncated results (the broker events have a size limit).

All async workers' life cycles are also processed and displayed, beautifully syntax highlighted too. If you enable task_send_sent_event, all triggered tasks show up immediately on screen (it's quite nice to see!).

The memory consumption for server persisted tasks, although very optimized, must of course be limited. By default it stores 10,000 tasks and 100 workers at a time, and is configurable.

Hints to extract the most out of it

This software is licensed under the MIT License. See the LICENSE file in the top distribution directory for the full license text.

Thank you for your interest!

I've put much ❤️ and effort into this.
If you appreciate my work you can sponsor me, buy me a coffee! The button is on the top right of the page (the big orange one, it's hard to miss 😊)