A subclass of UIView which allows you to draw with your fingers.

The easiest way to include TouchDraw is by using CocoaPods and adding the following to your Podfile.

If you're not using CocoaPods, you can add the TouchDrawView.swift file to your project.

You can either programmatically add the TouchDrawView or add it using storyboards.

If using storyboards, you must add a UIView to your storyboard. Give it the TouchDrawView class, and TouchDraw module.

If programmatically adding the view, you can use the init(frame: CGRect) method to create a new instance of TouchDrawView. You must make sure to write import TouchDraw at the top of the class, and also set isUserInteractionEnabled to true.

When customizing the TouchDrawView you can setting its delegate. The container can conform to parts of TouchDrawViewDelegate, which has the following functions:

The TouchDrawView exposes the following methods:

If you'd like to see this library in action, you can download the entire repository and open Demo/TouchDrawDemo.xcworkspace.

Demo/TouchDrawDemo/ViewController.swift is where most of its functionality is demonstrated. 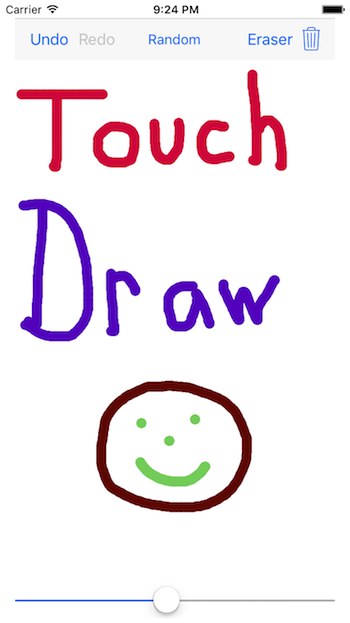 This package has the MIT license, which can be found here: LICENSE.

Please make sure to follow the Code of Conduct when you interact with this project. Thanks!