IMPORTANT NOTE: Haring is a fork of MarkdownKit that was created when that project had been abandoned. MarkdownKit has a new owner and has been actively developed to apply most of the changes that Haring has and a few more. However, it still has only one developer. Therefore, this fork will still be maintained for the time being. However, there is no roadmap to ehancing Haring. Also, the project I was using Haring in has been cancelled, so I no longer have a vested interest in maintaining it. We do welcome pull requests though, and we have 3 maintainers. -- David Lari

Haring is a customizable and extensible Markdown parser for iOS. It supports many of the standard Markdown elements through the use of Regular Expressions. It also allows customization of font and color attributes for all the Markdown elements.

Haring was forked from Ivan Bruel's MarkdownKit which appears to be no longer maintained. You should be able to drop this in as a replacement very easily. 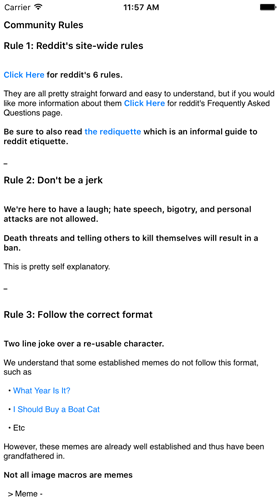 Haring is available through CocoaPods. CocoaPods is a dependency manager that automates and simplifies the process of using 3rd-party libraries like Haring in your projects. To integrate Haring into your Xcode project using CocoaPods, simply add the following line to your pod:

Older versions are not updated but if you need to support older Swift versions see below.

Haring is available through Carthage. Carthage is a decentralized dependency manager that builds your dependencies and provides you with binary frameworks.

You can install Carthage via Homebrew with the following command:

To integrate Haring into your Xcode project using Carthage, simply add the following line to your Cartfile:

In order to use Haring to transform Markdown into NSAttributedString, all you have to do is create an instance of MarkdownParser and call the parse(_) function.

To add new Markdown elements all you have to do is implement the MarkdownElement protocol (or descendants) and add it to the MarkdownParser.

Haring is maintained by David Lari. Contributions and pull requests are welcomed.

Haring was derived from MarkdownKit by Ivan Bruel. It was created due to the apparent abandonment of MarkdownKit.

Special thanks to Michael Brown for helping out with the UTF-16 Escaping/Unescaping.

Haring is available under the MIT license. See the LICENSE file for more info.