CTShowcase is a showcase library for iOS that lets you to highlight individual views in your app using static or dynamic effects.

CTShowcase can be used both from Objective-C and Swift code.

This document shows examples using the latest version of the library.

To install CTShowcase using Carthage, add the folowing line into your Cartfile:

Then run the carthage update command to build the framework and drag the built CTShowcase.framework into your XCode project.

To install CTShowcase using CocoaPods, add the following line into your Podfile:

Then run the pod install command and use the created workspace to open your project from now on.

Just add the files CTShowcaseView.swift and CTRegionHighlighter.swift to your project

The example project is located in the Example directory. The framework target is already added as a dependency to it therefore you can run it directly.

The usage of CTShowcase is very simple.

Create an instance of CTShowcaseView

Setup the showcase for a view available in your layout

and finally, show the showcase

That's it! CTShowcaseView will automatically determine the best location to display the title and message.

You can dismiss the showcase by tapping anywhere on it.

CTShowcaseView will use the key parameter to determine whether the showcase was displayed before, and won't display it again if it was. If you want the showcase to be displayed more than once, pass nil as the key. Similarly, if you don't need to do anything within the closure, pass it as nil as well.

Or you can simply use the provided convenience initializer:

You can optionally give an offset and margin value when setting up a showcase by using the following method instead of setup(for:)

CTShowcaseView exposes the labels it uses to display the title and message as properties. Therefore you can set their properties such as the font or color by accessing them directly.

CTShowcaseView uses an instance of a class conforming to the CTRegionHighlighter protocol to draw its highlight.

CTShowcase comes with two classes that already conform to his protocol so that you don't have to create one your own to start using it. These classes are: CTStaticGlowHighlighter and CTDynamicGlowHighlighter. Each one can draw a rectangular or circular highlight and has other properties that allows you to customize their appearance.

This is the default highlighter used by the CTShowcaseView. It draws non-animated highlights. You can customize its properties before setting up the showcase if you don't like their defaults. 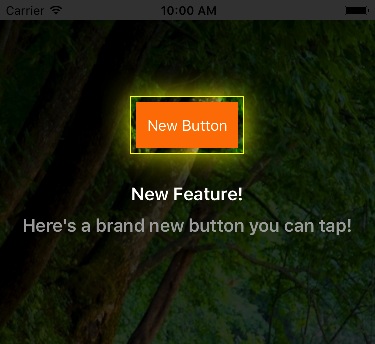 This is the animated version of the static highlighter. In order to use it, create an instance and set it as the highlighter of your CTShowcaseView instance.

If you set its type to circular

You'll end up with a circular highlight as shown below:

The classes provided with CTShowcase should be sufficient for most applications, but in case you want to add different highlight effects, that's easy to do as well.

Just create a new class conforming to the CTRegionHighlighter protocol and use it as the highlighter of the CTShowcaseView instance. Check the comments in the code to find out what the draw(on:targetRect:) and layer(for:targetRect:) methods in the protocol should do.