A Airbrake Notifier for iOS

The Airbrake iOS/Mac OS Notifier is designed to give developers instant notification of problems that occur in their apps. With just a few lines of code and a few extra files in your project, your app will automatically phone home whenever a crash or exception is encountered. These reports go straight to Airbrake where you can see information like backtrace, device type, app version, and more.

The notifier handles all unhandled exceptions, and a select list of Unix signals:

In order for the call stack to be properly symbolicated at the time of a crash, applications built with the notifier should not be stripped of their symbol information at compile time. If these settings are not set as recommended, frames from your binary will be displayed as hex return addresses instead of readable strings. These hex return addresses can be symbolicated using atos. More information about symbolication and these build settings can be found in Apple's developer documentation. Here are the settings that control code stripping:

Airbrake supports a version floor for reported notices. A setting called "Latest app version" is available in your project settings that lets you specify the lowest app version for which crashes will be saved. This version is compared using semantic versioning. The notifier uses your CFBundleVersion to make this comparison. If you have apps in the wild that are using an older notifier version and don't report this bundle version, the notices will dropped by Airbrake. For more information on how this is implemented, read documentation article.

Please remove all of the resources used by the notifier from your project before upgrading. This is the best way to make sure all of the appropriate files are present and no extra files exist.

With version 4.*, Airbrake iOS also requires your Airbrake project ID. To find your project_id and project_key navigate to your project's General Settings and copy the values from the right sidebar. 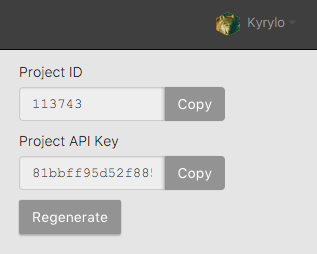 Running the notifier in Swift as framework

And you're good to go.

Running the notifier in Swift as static library

When you add Airbrake iOS to your Swift project, Xcode will automatically add the bridging header for 'ABNotifier' class.

When Xcode didn't generate the bridging header for your project, for example, you installed Airbrake iOS from cocoapods, you can create a bridge file manually.

Running the notifier in Objective-C

The ABNotifier class is the primary class you will interact with while using the notifier. All of its methods and properties, along with the ABNotifierDelegate protocol are documented in their headers. Please read through the header files for a complete reference of the library.

To run the notifier you only need to complete two steps. First, import the ABNotifier header file in your app delegate.

Next, call the start notifier method at the very beginning of your application:didFinishLaunchingWithOptions:

The API key argument expects your Airbrake project API key. The environment name you provide will be used to categorize received crash reports in the Airbrake web interface. The notifier provides several factory environment names that you are free to use.

The ABNotifierAutomaticEnvironment environment will set the environment to release or development depending on the presence of the DEBUG macro.

Airbrake notices support custom environment variables. To add your own values to this part of the notice, use the "environmentValue" family of methods found in ABNotifier.h.

You can log your own exceptions at any time.

When custom exception is used, the notifier will mirror the existing uncaught exception handler, and allow the application to catch and record exceptions without actually crashing.

To test that the notifier is working inside your application, a simple test method is provided. This method raises an exception, catches it, and reports it as if a real crash happened. Add this code to your application:didFinishLaunchingWithOptions: to test the notifier:

Similarly you can call the test method in Swift.

If you use the DEBUG macro to signify development builds the notifier will log notices and errors to the console as they are reported to help see more details.

The notifier requires iOS 6.0 or higher for iOS projects and Mac OS 10.7 or higher for Mac OS projects. It's also compitable with Swift. Current iOS Notifier version is 4.2.8.

In case you have a problem, question or a bug report, feel free to:

The project uses the MIT License. See LICENSE.md for details.