High-performance pure-javascript SHA1 implementation suitable for large binary data, reaching up to half the native speed.

Rusha is available via npm:

Rusha is available via bower:

It is highly recommended to run CPU-intensive tasks in a Web Worker. To do so, just follow the instructions on Using the Rusha Worker.

If you have a good reason not to use Web Workers, follow the instructions on Using the Rusha Hash API instead.

You can create a new worker in two ways. The preferred way is using Rusha.createWorker(), which spawns a webworker containing the hashing logic, and returns back a Worker object:

If for some reason this does not work for you, you can also just point the Worker constructor at rusha.js or rusha.min.js, like so:

Note: In order to make the latter work, Rusha will by default subscribe to incoming messages when it finds itself inside a worker context. This can lead to problems when you would like to use Rusha as a library inside a web worker, but still have control over the messaging. To disable this behaviour, you can call Rusha.disableWorkerBehaviour() from within the worker.

Communicating with the worker

The Rusha Hash API is inspired by the Node.js Hash API.

You instantiate a new Hash object by calling Rusha.createHash().

Note: Due to its synchronous nature, Hash#update does not accept data of type Blob. If you need to work with Blobs, you can either use the Rusha Worker, or use FileReader#readAsArrayBuffer to read the contents of the Blob, and then invoke Hash#update with the ArrayBuffer that was returned.

The Rusha Object API is deprecated, and is only documented here for older code bases that might still be using it.

You should be using the Hash API instead, which is documented above.

Your instantiate a new Rusha object by doing new Rusha(). When created, it provides the following methods:

If you want to check the performance for yourself in your own browser, I compiled a JSPerf Page.

A normalized estimation based on the best results for each implementation, smaller is better: 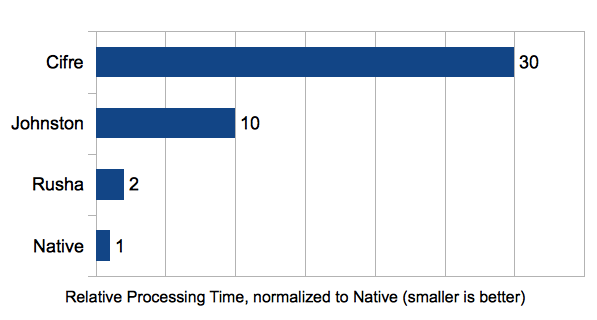 Results per Implementation and Platform: