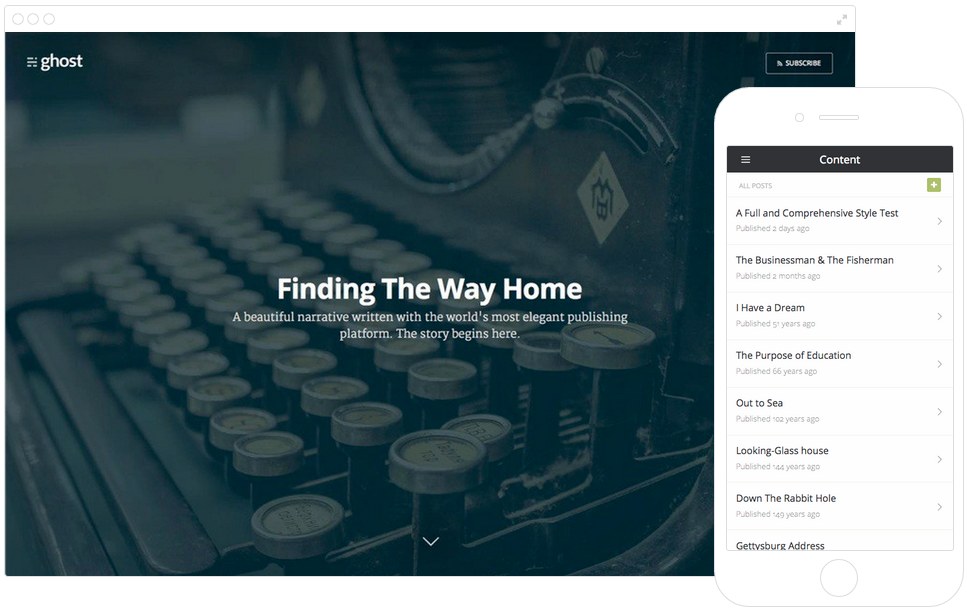 The project is maintained by a non-profit organisation called the Ghost Foundation, along with an amazing group of independent contributors. We're trying to make publishing software that changes the shape of online journalism.

NOTE: If you’re stuck, can’t get something working or need some help, please head on over and join our Slack community rather than opening an issue.

More install docs here in case you got stuck.

Install Ghost. If you're running locally, use master. For production, use stable. 🚫🚀🔬

Minify that shit for production?

Congrats! You made it. BTW you can also just npm install ghost if you're into that sort of thing. NPM aficionados can also read up on using Ghost as an NPM module.

More general install docs here in case you got stuck.

Save yourself time and headaches with our fully managed Ghost(Pro) service. Deploy a new instance of Ghost in a couple of clicks running on DigitalOcean’s rock solid infrastructure, with a worldwide CDN thrown in at no extra charge.

All revenue from Ghost(Pro) goes to the Ghost Foundation, the non-profit org which funds the maintenance and further development of Ghost.

Other options are also available if you prefer playing around with servers by yourself.

Staying Up to Date

When a new version of Ghost comes out, you'll want to look over these upgrade instructions for what to do next.

You can talk to other Ghost users and developers in our public Slack team (it's pretty awesome). We have a public meeting every Tuesday at 5:30pm UK time.

New releases are announced on the dev blog. You can subscribe by email or follow @TryGhost_Dev on Twitter, if you prefer your updates bite-sized and facetious.