Record API responses for later. Work from a plane, train, or submarine. Code and test without an API server.

Record and Play Back your API 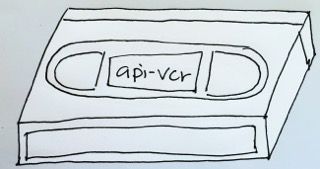 This records API responses so you can play them back later, quickly and reliably.

If you're a front-end developer this means you can develop without an API server--even without the internet.

You can also write tests for front end components that have some API dependencies but shouldn't break if the API server has hiccups.

This is a node app with no database dependency. It's easy to integrate with grunt or gulp, or use from the command line.

This works by standing up a server in between your app and your API. If you have control over your app's API url, it's easy--just point it to api-vcr instead.

If you have multiple API servers, no problem. You stand up an instance of the vcr for each one. Each VCR will have a different port so you set them up as different urls in your app, just like you're probably already doing.

If you do not have control over the API server being requested (if you're using library code, for example), you can modify your etc/hosts file to accomplish the same flow. I'm thinking about a script to make this easier, but I have some security concerns and I'm not sure about the design. I don't want to mess up anybody's system.

Whenever you make reqeuests to api-vcr in --record mode, it passes the request on to your destination api server and records the response. You can see JSON files for your recorded responses in finder any time: This is similar to some other projects. Other projects might be better for your needs, but some things make this one different:

This module is a dev tool with a command line interface, so it is installed globally.

I'd actually prefer it to be local to a project, but there's no way to provide a nice CLI API in a locally installed node module. You'd have to type ./node_modules/.bin/api-vcr all the time (plus args), and I don't want to do that to you. This is actually why grunt-cli exists, I now understand.

First let's launch in --record mode so we can pass through requests and record the responses:

Now lets hit some endpoints so we can get a nice set of data.

In a browser, you can drop in these urls, or any from the jsonplaceholder api:

For each request, the VCR will create a single JSON file, using the request information to name the file.

For example, the request:

Is mapped to the file:

After recording a little, you can stop the server with Ctrl+C. Armed with recorded data, you're ready to run in offline playback mode.

Similar requests you haven't recorded yet return their best guess:

You can specify a port for the vcr server to listen on. This is useful for running more than once instance. The port of the API server is used by default (unless that port is 80), this makes keeping proxies straight a little easier if you have remote APIs identified only by port number.

By default, data is stored wherever you run the command. If you always run the command from your project dir, this works well. You can also set a hard-coded data path.

By default the vcr looks for a sibling if it can't find a requested object. If you ask for user/7, for example, it will return user/42 if it has one. This is awesome if you just want to keep working and it doesn't matter too much that it's the wrong user/product/sprocket/whatever.

Not everyone wants this behavior though, so this option lets you turn it off.

Data is all in the ./api-vcr-data folder local to where you run the command, or where you configure it with the --data option. If you run this as a build task inside your project this works well--your api data is stored with your project.

You can create or modify data at will and distribute it in git with your project for consistent testing and front-end development across machines.

Please be aware that if you run in record mode, it will overwrite any file with the same name, so if you make extensive manual edits to the data you should protect them.

Running the local version is the same except instead of api-vcr, you use ./cli.js from this folder.

You can bump the version with npm's awesome npm version patch && npm publish.