CategoriesLeaderboard
Choose the right package every time
Openbase helps you choose packages with reviews, metrics & categories. Learn more
CategoriesLeaderboard
Sign up with GitHub
By signing up, you agree to our terms of service and privacy policy
Log In
Earn Tokens
Sign Up
10 Tokens
Review a package
10 - 20 Tokens
Review gets an upvote
10 Tokens
What's Openbase?•Help•Send Feedback
github.com/kwk/docker-registry-event-collector
go get github.com/kwk/docker-registry-event-collector

Aggregate docker registry events and store them in MongoDB for use by other frontend tools.

Here's an overview of the architecture: 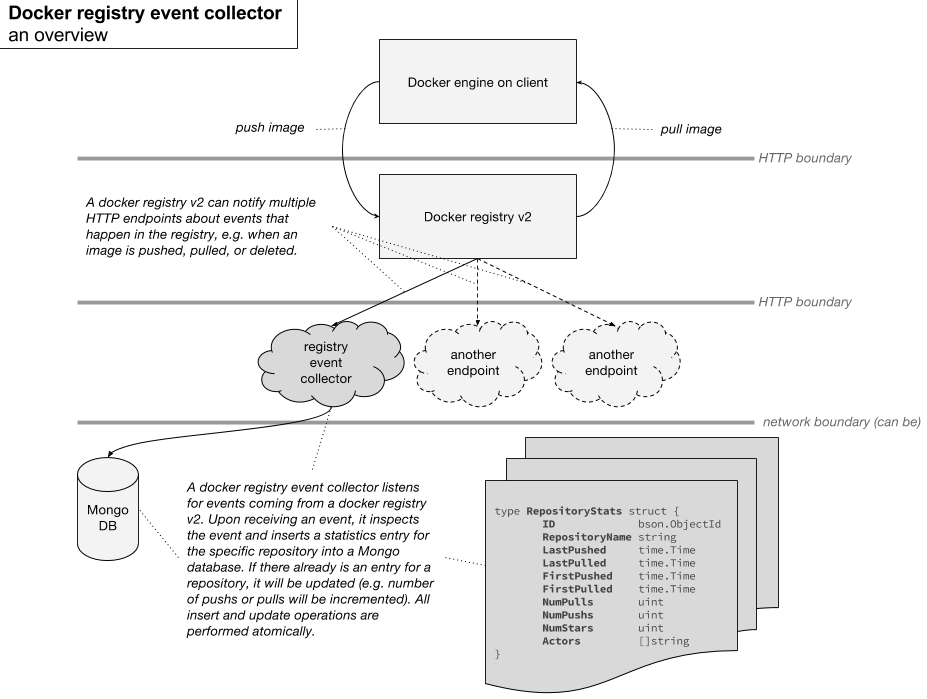 Docker is a fantastic tool, there's no doubt about that. One of the main reasons for it's success is that is provides a central place from which everybody can grab pre-built images for famous tools or Linux distribution. This place is called the Docker Hub.

Besides the official Hub the Docker team gives everybody the tools to host their own hub, aka registry. They used to have a registry written in python that has been around for quite some time. It is often referred to as registry v1 because it was the first incarnation of the registry (actually, the latest version ever released was 0.9.1).

With the advent of the docker/distribution project, the registry v1 must be considered deprecated. The docker/distribution project also contains a registry component that is written in Go, just like the rest of Docker. I read somewhere that the intention is to share more code between all the different projects and to have the Docker team members be able to work in a common programming language: Go. This registry component is often referred to as registry v2.

The HTTP-API to query a registry has changed a lot from v1 to v2. Although v2 responses contain some of the information that existed in v1 responses, this is only in the for compatibility with older Docker client versions.

As an alternative to the compatibility information, the docker registry v2 has introduced the concept of registry event notifications to HTTP endpoints.

Let me shamelessly copy some relevant information for you:

Goal of this project and architecture

The docker registry event collector listens for events coming from a docker registry v2. Upon receiving an event, it inspects the event and inserts a statistics entry for the specific repository into a Mongo database. If there already is an entry for a repository, it will be updated (e.g. number of pushs or pulls will be incremented). All insert and update operations are performed atomically.

The Mongo database then becomes a storage for extra information on a repository that isn't available from the pure registry v2 API. The information stored give answers to these questions:

In addition to this information, there's room for more. One can for instance think of keeping track of how many stars a repository has by simply adding a numstars field to each repository document in the Mongo database. A frontend then can simply increment this entry using a Mongo update call:

If a frontend is written with Meteor, then the changes to the database would be immediately reflected in all clients that have a subscription on the numstars field.

Build the tool on your own

These instructions walk you through compiling this project to create a single standalone binary that you can copy and run almost wherever you want.

Make sure you have at least go version 1.4.2. The version that ships with current LTS Ubuntu (14.04) is too old to compile the code.

To check your current go version:

Get the source code

I highly encourage you to follow the steps I present here to make the compilation experience as smooth as possible. If you're new to Go you might find it silly but Go has some good reasons for operating this way, trust me.

This will download all dependencies specified in the source code's import sections. It might take some time to finish. Again, if you're new to Go you might wonder if there's no Makefile or something. In fact, there is none!

The translation from a JSON notification Event to an upsert (aka. update or insert) MongoDB command is tested for manifest events. I also test that layer push events are not considered to be updates and don't result in any MongoDB commands. I really appreciate any contribution.

To build the executable run this command. It should take no more than a few seconds.

Tweak the accompanied config.yml file to your needs and then run:

Please note, that the DREC only works with HTTPS and so you must specify a certificate and a key file. There are default files you can use for testing but you should definitively create your own files.

I've setup a job to build an publish docker images for this project at the Docker Hub: